The southern most part of Far North Dallas between I-635 and Spring Valley Rd is a good mix of upscale, middle-class, and working-class singles, couples, and families. This neighborhood is located just north of I-635 in between Central Expressway and The North Dallas Tollway. The Black percentage in this area ranges from 15%-23%. Median household incomes here range from about $38,000 to $47,000 per year. It includes the upscale Dallas Galleria, the Valley View Centre Mall and several other upscale and midscale shopping centers. Jobs are plentiful and include Pizza Hut, and Kinko’s FedEx World Headquarters. Most black residents enjoy the diversity in the area that does not exist in many cities in America. Schools in this area are located in the Dallas Independant school district. Median monthly rent ranges from $724 to $929.

Further north near Frankford rd, Marsh Ln, and President George Bush Turnpike are a conglomeration of middle class apartment complexes. Some of which were constructed after 2000. Rents are very reasonable ranging from $713 to $957. This area has a very suburban look with shopping plazas and big box stores. Median household Incomes range from around $42,000 to $56,000 a year. The Black percentages in this area range from 12% to 27% African American. Schools in this area are in the Carrollton-Farmers Branch and Plano School Districts.

Statistics in the above paragraphs are from the Census Bureau’s American Community Survey, based on samples from 2005 to 2009, compiled by The New York Times. 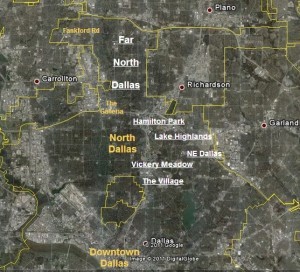